You are here: Home / Market Reports / Frenzy Fades to a Simmer as Inventory Dips Going into Summer 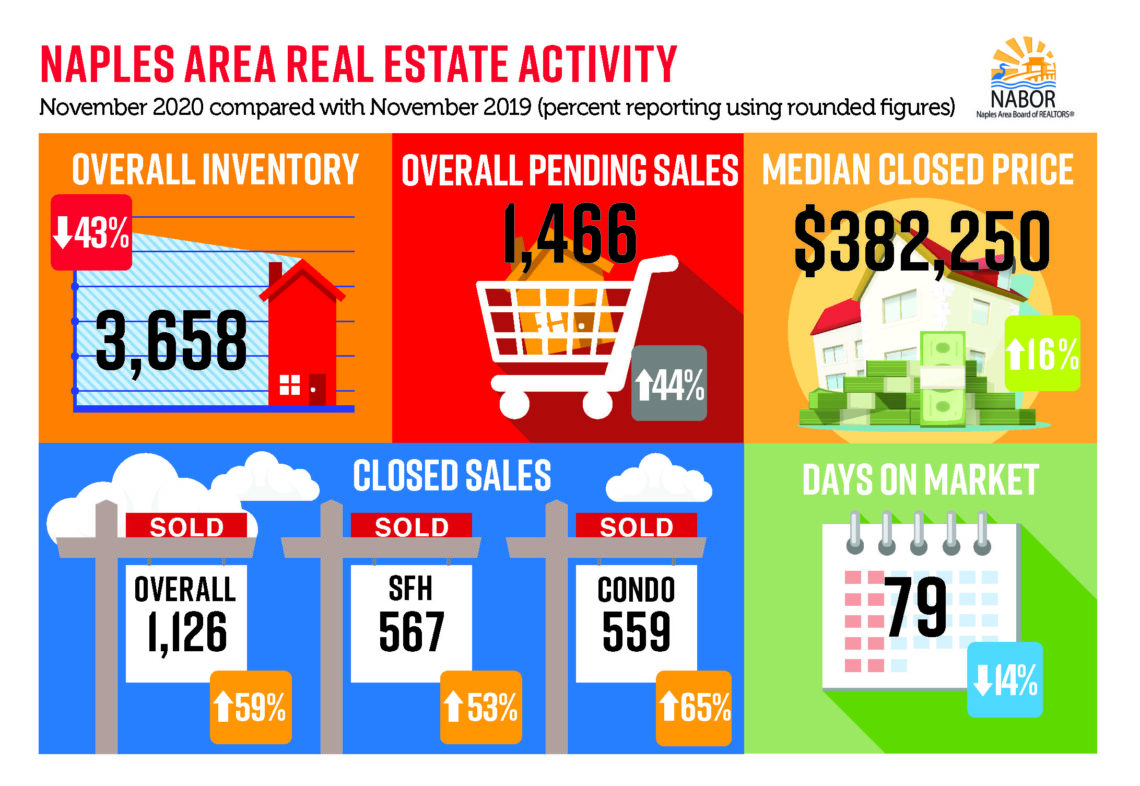 Naples, FL (July 23, 2021) – With less than a one month supply of inventory available, the Naples area housing market experienced a 14.5 percent decrease in overall pending sales in June to 1,256 pending sales from 1,469 pending sales in June 2020. Low inventory levels in June also contributed to a 7 percent decrease in showings for the month. This simmering of activity has broker analysts who reviewed the June 2021 Market Report released by the Naples Area Board of REALTORS® (NABOR®), which tracks home listings and sales within Collier County (excluding Marco Island), certain that the wild housing market frenzy that began about a year ago – peaking in March – is now decelerating and being replaced with a new level of activity that reflects improved market equity for sellers and sustained buyer interest from people seeking permanent residency.

“Last year, the second half of the year was better than the first,” said Mike Hughes, Vice President and General Manager for Downing-Frye Realty, Inc., who added, “but I think we will probably see the opposite this year.”

“Sellers are capitalizing on the current market,” added Hughes, “but buyer demand has simply stripped our inventory. Since April, we’ve seen a 55 percent drop in inventory.” Hughes pointed out that the June report showed Naples had four times the inventory but only 200 more sales last June than what was reported during June of 2021.

If you are looking to buy or sell a home in Naples, you can browse listings here and reach out to a Downing-Frye REALTOR®.

Contributed by the Naples Area Board of Realtors

The Naples Area Board of REALTORS® (NABOR®) is an established organization (Chartered in 1949) whose members have a positive and progressive impact on the Naples Community. NABOR® is a local board of REALTORS® and real estate professionals with a legacy of nearly 60 years serving 6,000 plus members. NABOR® is a member of the Florida Realtors and the National Association of REALTORS®, which is the largest association in the United States with more than 1.3 million members and over 1,400 local board of REALTORS® nationwide. NABOR® is structured to provide programs and services to its membership through various committees and the NABOR® Board of Directors, all of whose members are non-paid volunteers.

The term REALTOR® is a registered collective membership m ark which identifies a real estate professional who is a member of the National Association of REALTORS® and who subscribe to its strict Code of Ethics.

(239) 261-2244 Main Number
(800) 448-3411 Toll Free
Contact
New Listing Alerts What's My Home Worth Market Reports
"Our experience with Anna and Mike Bryant was an amazing one. We were long distance purchasing a home in Naples, and they were there every step of the way,... continued"
- Sally and Bill Cooksey
All Testimonials